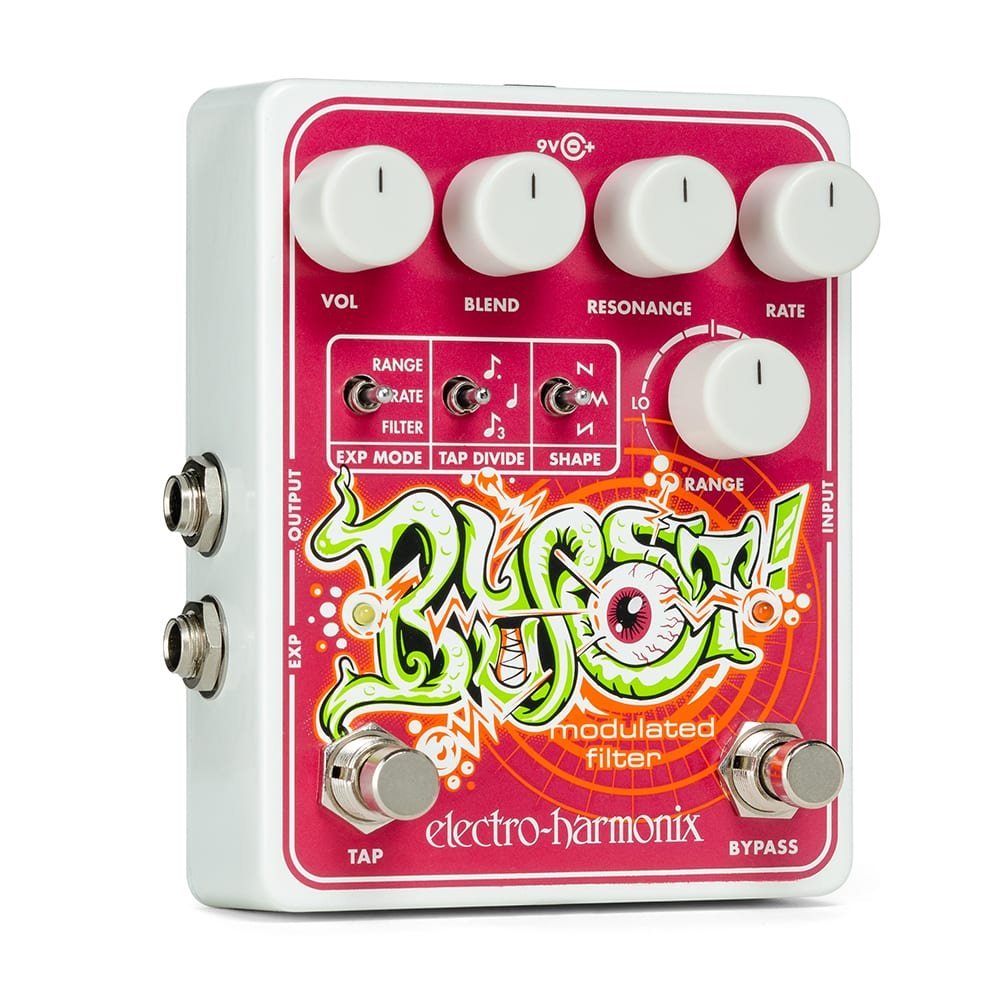 Freakish Filter Madness for Your Pedalboard

Synth-style filter modulation may not be for everybody, but if you enjoy funky filter sweeps or simply want to explore new avenues to enhance your guitar effects, then you're going to love the Electro-Harmonix Blurst modulated filter pedal. The Blurst follows the tried-and-true modulated filter formula used by countless synthesizers: you start with a variable resonant filter — usually a lowpass filter like the one featured in this pedal — and then modulate the filter cutoff point with an LFO (low-frequency oscillator). The results can be exceptionally stunning, especially when you combine the Blurst with other effects.

What the heck is a resonant lowpass filter???

If you don't have your resident synth nut handy (or don't want to call your Sweetwater Sales Engineer), then here's a simple explanation. A lowpass kills frequencies above a cutoff point but not those below it, literally letting lows pass through it while filtering out highs. Resonance is a harmonic boost that bumps up the frequencies right around the cutoff point. You can control how dramatic this boost is via the Blurst's resonance control, subduing it entirely or creating a hard stab to create an effect similar to a stalled wah-wah.

Why modulation makes this filter pedal so cool

The "modulated" part of this filter has to do with how you control the filter cutoff point. On its own, the Blurst uses its internal LFO to sweep the lowpass filter's cutoff point between a frequency range you can specify via the Range knob. You can set the speed of the sweep via the Rate knob, and the Shape mini toggle lets you choose from back and forth, upward, or downward filter motion. A tap tempo footswitch allows you to sync the LFO to the beat, ensuring that it pulses in time with your music, and letting the LFO run freely creates a fun asynchronous sweeping effect that's not entirely dissimilar to a phaser.

Transform the effect with an expression pedal

Got an expression pedal handy? If not, you may want to pick one of those up as well, because an expression pedal can add dimensions of additional effects to the Blurst. There are three settings for the Blurst's expression mode: Range, Rate, and Filter. By setting the range on the fly, you can extend the phaser-style sweeping effect. For instance, you may want to crank it up for rhythm parts but pull it back to tighten up your leads. Controlling the rate lets you pull off rotary-cabinet-style ramp-up effects or sheer chaos, depending on how hard you tilt your expression pedal. Love the wah-wah-like quality of your Blurst? Just turn down the range and use your expression pedal to sweep the filter manually.

Wonderful effect enhancer for your pedalboard

There are tons of great ways to use the range of effects you can get out of the Blurst in your guitar rig. On its own, it can add spice to a clean tone, but it's also a great companion for other effects. Toss it on a dirty channel or inline with your favorite distortion box, and you'll get sweeping accents that don't blur your tone the way a phaser, flanger, or chorus does. But you can also combine it with another modulation effect to get intricate counter-point sweeps. Finally, if you totally crank the rate, you'll achieve something akin to frequency modulation (FM) synthesis, totally transforming your guitar tone.

First up, it's nice to see a simple modulated resonant filter on something other than a synthesizer. Kudos to EHX for that. With its extended range control, you'll love how the Blurst can spice up your bass rig. Pro tip: if you dig fuzz bass, then don't even think about it — grab one of these pedals and never look back. All of that said, there's no reason at all you can't stick a Blurst (or two) on your synthesizer's output. Creative keyboard players have long adopted stompboxes to enhance their tones, and this one is a no-brainer. Basically, it's an LFO-controlled lowpass filter in a stomp box, which is a simply wonderful tool to have in your collection.